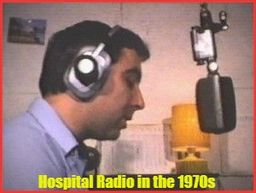 Like many other radio presenters of a 'certain age', I caught the radio ‘bug’ when I listened to the pirate radio stations in the sixties on my 'tranny'. The jingles were my favourite part and ‘Big L’ Radio London had the best ones. I never dreamed I'd have my own versions of them on my own show one day! It was all very exciting then, and it made me want to be a DJ myself. I used to practice ‘mixing’ music in my bedroom with just a Dansette record player and a small, reel-to-reel tape recorder!
In the seventies, I started broadcasting on a hospital radio station in Surrey and one of my shows won the NAHBO national competition for best hospital radio programme along with my co-presenter Steve Jarrett. Among the judges were DJ & TV presenter Noel Edmonds and newsreader Richard Baker. I also started recording interviews with many celebrities, including DJ Johnnie Walker and comedy legends Morecambe & Wise. One of my favourite memories of hospital radio was presenting a live 'Juke Box Jury' in front of an audience with a celebrity panel including singers Helen Shapiro and Rob Davis of the band Mud.
In 1976, I became a Butlin's 'redcoat' entertainer presenting music and chat from their Radio Butlin studio at Clacton in Essex. Great fun, but very hard work.
Skipping forward to the 1990's, I did the weekday morning show on a station called Eclipse FM which broadcast on cable TV and regular RSLs. One of our directors was DJ Dave Cash. Sadly, the station closed when we didn't win the local radio franchise for SW London (now run by Radio Jackie.) Again, I was lucky enough to do many celebrity interviews at Eclipse including singers Marty Wilde and Bo Diddley (who I had to address as Mr Diddley!)
A few years ago, I did a spell on the weekday afternoon show of a commercial station named Seahaven FM on the East Sussex coast.
​My most embarrassing moment in radio was when I interviewed the comedian Richard Digance and I got a nose-bleed halfway through our chat!
I now really enjoy presenting my weekly Happy Hour show on various British and international FM & internet radio services. They are all a very friendly bunch and they’ve got talent oozing out of their studios!
The Happy Hour Show supports the brave work of the Royal National Lifeboat Institution.
​Please click on the logo below to find out more.